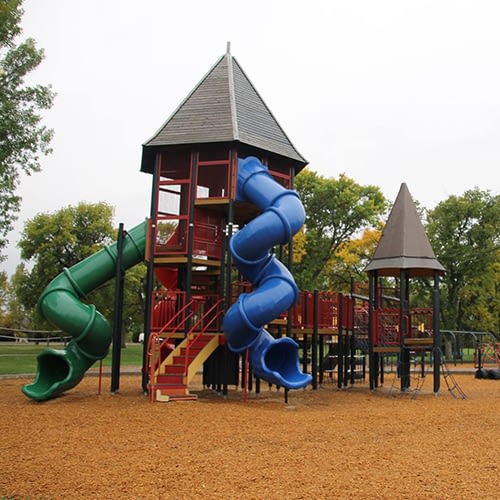 Wylie Park is the region’s biggest park made up of 200 acres complete with a lake, trails, playgrounds, a zoo and Storybook Land. 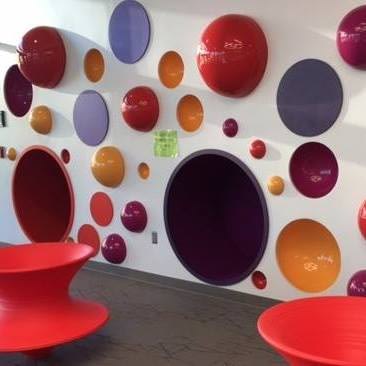 Aberdeen’s new city library has won not one but two architectural awards and is a place kids dream of. 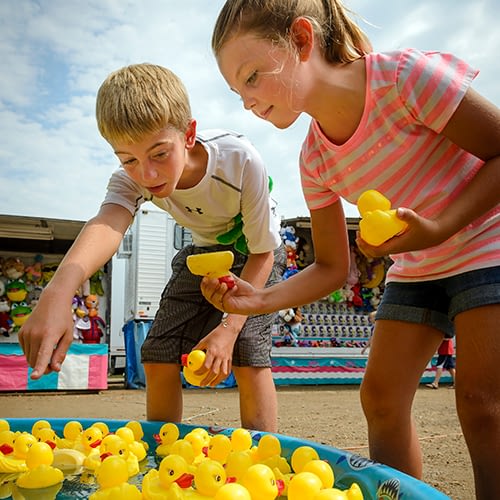 The Brown County Fairgrounds become a city of its own during fair week. Each year an estimated quarter of a million people visit the fair.

We once met an Aberdeen artist who liked to travel, but he lost his inspiration when he got away from the flatlands of Brown County. As soon as he neared home — and could once again see 25 miles in all directions — he felt rejuvenated. His landscapes captured the subtle layers of color from the marsh grasses to the cornfields, tree lines, onto the horizon and upward to prairie sunrises and sunsets. That’s how to appreciate Brown County; the multi-colored, horizontal layers. In the midst of it all lies Aberdeen, South Dakota’s largest northern city (pop. 28,000) and a major hub for agriculture, railroading, outdoor lovers, the arts, commerce and trees. Like the flatlands and lakes around it, Aberdeen is multi-faceted and that makes it fun to visit.

Aberdeen’s heritage as a city for children began in the 1890s when writer L. Frank Baum lived there. Baum later wrote The Wizard of Oz, a prairie fantasy partly inspired by his days in Aberdeen. Decades later, the Aberdeen community embraced Baum’s playful vision by creating Storybook Land in Wylie Park, a mile west of the city. Dorothy, the Tin Man and dozens of other lovable characters from nursery rhymes and children’s books are featured there. Families walk the Yellow Brick Road, climb aboard an Express Train, fly along the Humpty Dumpty Roller Coaster and even sail on the Wizard’s Balloon Ride. A Storybook Land Festival is celebrated in July. Storybook Land Theater presents children’s plays on summer weekends in the castle. The city-owned park has found a family-friendly balance between the thrills of big-city amusement park (with a South Dakota price tag) and the small-city charm that Baum loved about Aberdeen.

Beyond Storybook Land … a City for Youth

Aberdeen residents devote great time and resources to the aforementioned Storybook Land, but it’s just one example of the city’s emphasis on children. Wylie Park, adjacent to Storybook Land, has family walking trails, a pretty lake and a zoo of Great Plains wildlife. Aberdonians’ most recent investment for youth is an $8 million library, which opened in 2017. The 30,000-square-foot K.O. Lee Library (215 4th Ave. SE) near downtown is a splash of color, light and learning. An eclectic children’s area includes virtual escape rooms with an Old McDonald’s Farm, optical illusions and laser shows — plus books, of course. Wizard of Oz aficionados will want to see the Baum exhibit. Families with children will also appreciate the special “please touch” exhibits at Dacotah Prairie Museum.

A Downtown for All Who Love Downtowns

Though the railroads created Aberdeen, trains aren’t the draw they once were. Today, arts, music and media attract people to the city’s downtown district. A good example of changing times is Red Rooster, a one-of-a-kind coffee house that’s become a gathering place for everyone — professionals, artists, youth … and also for people with disabilities. Classic diners include the Flame, an old-style steakhouse, and The Circus Sports Bar & Grill, famous for buffalo wings and 20 burgers, including the Clownburger and Lion Tamer. At Slackers, enjoy 100 craft beers (well, not all at once), video game stations, live music and an occasional comedy night.

Today’s Wolves Are Wise and Friendly

Coyotes and Jackrabbits get most of the attention in southern South Dakota, but Wolves rule the North Country; they, of course, are the mascots of Northern State University, a picturesque and interesting campus. NSU has an international flavor due to a concerted effort to create diversity; its 3,600 students represent 50 different countries. An International Sculpture Garden on the commons features the graceful figurines of Tuan Nguyen, a noted artist who escaped to the U.S. after the Vietnam War. Other sculptures on the tree-shaded campus include: a likeness of Cecil E. Harris, a Northern grad and a celebrated World War II Navy ace; and another of Father Robert Haire, who was suspended from the ministry due to his political involvement (though the Pope, no less, reinstated him). Father Haire is considered the father of the initiative and referendum process, which he saw as a check on elected officials.

Watch for a Big Apricot — and Other Trees

The Aberdeen countryside was a treeless plain. “No tree to wave … only the faint melancholy soughing of the wind in the short grass,” is pioneer novelist Hamlin Garland’s description in Main Traveled Roads. Garland’s family homesteaded on the wildgrass prairie of Brown County. Today all the farms are ringed by trees, and Aberdeen is a veritable urban forest that includes a multitude of tree species, including South Dakota’s largest Manchurian apricot and paper birch. Trees grow big here, so long as they aren’t trampled by bison herds. Enjoy the forest by walking the streets, especially those around NSU, and in 25-acre Melgaard Park, south of the campus (with RV campsites). The newest wilderness is Kuhnert Arboretum, which is also south of the campus; though a work in progress, it has walking paths, ornamental gardens and 64 varieties of trees.

A City Where Cold Is Cool

Aberdonians never apologize for the weather. Yes, it’s colder here than some places; that’s part of the culture and it’s celebrated. An Aberdeen journalist once noted that there are advantages — such as you don’t worry about whether an activity is cancelled due to cold because it never happens. Folks just don a sweater. Here are a few ways to enjoy winter: l) Schedule your trip around the enchanting Snow Queen Festival in early January, where candidates from 38 towns are honored. The theme: “In every woman there is a queen.” 2) Explore nearby Sand Lake Refuge; the snow geese are gone, but Arctic snowy owls, eagles and other wildlife winter there. 3) Trails for cross-country skiing are groomed within the city limits, and skis can be rented for a few dollars at Manor Park. 4) On a winter evening, attend an Aberdeen Wings hockey game. The Wings are a winning team with the best attendance in the North American Hockey League because, remember, the weather stops no one in Aberdeen.

Insider Tips on How to Spend the Afternoon

Even if you don’t own a horse, visit the cowboy store known as Hitch’n Post and smell the leather of the saddles and tack. The aroma is free, and you might look good in a hat and a belt with your name engraved. Try the Strawberry Butter ice cream at the iconic Twist Cone (503 N. 3rd) and take a selfie by the nostalgic neon sign. Do the Main Street Scavenger Hunt (pick up the directions and clues at Dacotah Prairie Museum downtown). Then take your spouse to Karisma Boutique, a charming store known for serving great coffee, wine and beer as you browse its racks of men’s and women’s attire.

If You Wish, Please Take Your Seats …

Aberdeen is one of the Northern Plains’ great theater towns, thanks largely to the restoration of the historic Capitol Cinema, a stately 1927 Art Deco theater that closed in the 1980s when a modern movie house was built at the mall. The restoration effort spearheaded by the Questers has been an amazing success that has led the city’s newfound emphasis on theater and film. Today the Capitol is the hub for the South Dakota Film Festival (though it’s on a COVID hiatus), a Young Peoples’ Theatre and Aberdeen Community Theatre. Movies are also shown, including first runs and classics. Northern State University’s strong theater department further bolsters the city’s reputation, with performances at the Johnson Fine Arts Center on campus. NSU faculty and students also collaborate on the Northern Fort Playhouse, a summer theater at historic Fort Sisseton. Catch a show while in town.

A City That Takes Time for History

A sweet and timeless fact about Aberdeen is how its citizens fed delicious pheasant sandwiches to trains full of hungry young soldiers who passed through during World War II. Hunters and farmers provided the birds. Some days, volunteers made and served more than 1,500 troops. Their hospitality became legendary in military circles; after the war ended, Dwight Eisenhower and Harry Truman even came by for a sandwich. Today the same sandwich is served to hunters who arrive for opening weekend of the pheasant season in October — and many ask for the recipe, which any Aberdonian will happily share. The historic railroad depot still stands on North Main, near the impressive Dacotah Prairie Museum, where you’ll find a recreation of the canteen and other interesting exhibits and memorabilia of Brown County’s farm and railroad heritage.

Baum believed Aberdeen would embrace such a business, for it was no one-horse prairie pothole. The Hub City was progressive — there were 20 hotels, a library, four restaurants and a half-dozen newspapers in town. Electric light service and telephones were available. With the addition of Baum’s store, Aberdeen had everything a civilized town might want or need.

A Creative Utopia in Aberdeen

There’s something different about Aberdeen. This off-highway town of 28,000 or so, built on a swampy, windswept lowland by the Chicago, Milwaukee, and St. Paul Railroad, hasn’t just survived the overall decline of the rural, Midwestern railroad town. The Hub City still thrives, and not just economically.

My Day at the Track

I learned two things at the racetrack that day. Horseracing cannot simply be a hobby. Once it’s in your blood, you live it every hour of every day. That’s true for hundreds of jockeys, owners, trainers, handicappers and fans that pack the grandstands.

And the old adage is true. A fool and his money are soon parted.

Aberdeen earned the nickname Hub City in 1911 because four major railroads operated there. The old train depot at Main Street and Railroad Avenue still houses Burlington Northern Santa Fe Railway, but art, shopping, and health care now make up some of the spokes on Aberdeen’s hub.

Want to learn more about Aberdeen?