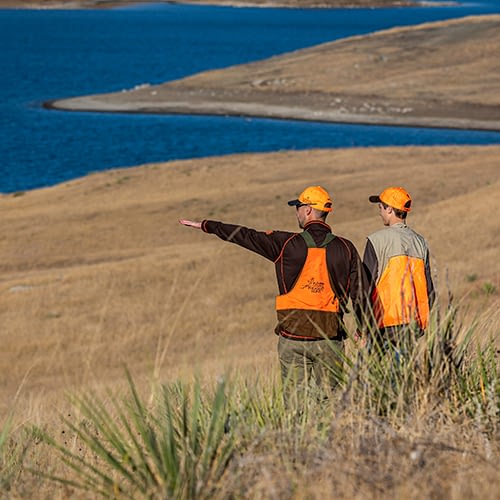 Each year, hunters from around the world flock to this area of the Missouri River for renowned pheasant, grouse, goose, duck and deer hunting. 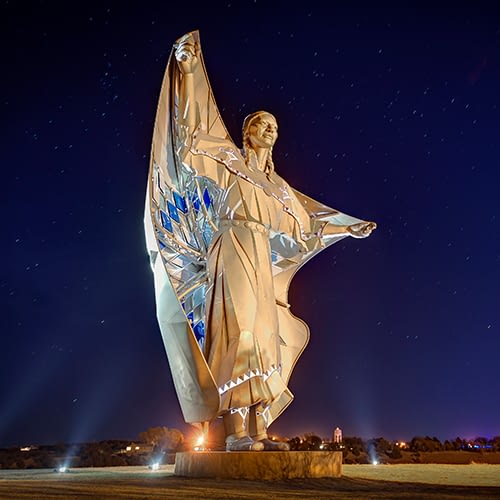 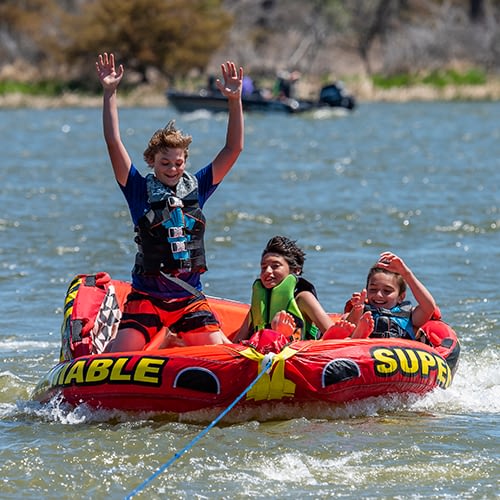 Reservoirs were created along the river thanks to dams near Pierre, Fort Thompson, Pickstown and Yankton. All four lakes offer an abundance of fishing, hunting, boating, camping, and so much more.

A River That Connects Us

Some rivers divide people. The “Mighty” Missouri River does just the opposite in South Dakota. It brings together all sorts of people who share a love for its wild nature, its rich history and the 440 river miles that provide a playground like nowhere else. John Milton, the late South Dakota poet and writer, called the Missouri “The Big Road” because it was always such an important pathway. Here’s a guide to just some of the many ways you might enjoy the world’s eighth longest river.

Lake Oahe’s nickname is “The Big Water” because it is so impressive, even in a state rich with rivers and lakes. The 230-mile waterway lies between the state capital cities of the two Dakotas, Pierre and Bismarck. It is so wide, wild and winding that boaters have become lost on its tributaries. But never fear; there are 100 or more bait shops, guide services, campgrounds, boat rentals, bars and restaurants — most, oddly, on the east side of the river — to point you in the right direction. The waters of Oahe are renowned for walleye — plus white bass, Northern pike and perch. Wildlife officials have also released Chinook salmon because the lake, with depths of 200 feet, stays cold enough for them to survive. The Oahe valley is also a wildlife paradise, rich with waterfowl, pheasant, sharp-tailed grouse and deer.

Lake Sharpe: The Land with the Big Bend

Lake Sharpe flows for 80 miles from Oahe Dam at Pierre to Big Bend Dam at Fort Thompson. One of South Dakota’s many intriguing geological features is a loop in the river called Big Bend. At the narrowest point (known as the Narrows), steamboat passengers often disembarked to stretch their legs as the crew proceeded 20 miles around the loop. Today you won’t need a steamboat; drive north of the tribal community of Lower Brule to the Narrows Historical Interpretive Area. If the gate to the parking lot is locked, go to the nearby Lower Brule Wildlife Office and inquire about access. A short trail leads to a summit with a panoramic view of what may be the longest loop on any river in America

Lake Francis Case begins with the tailwaters of Big Bend and flows southward more than 100 miles, between the Crow Creek and Lower Brule Indian reservations, past Chamberlain and onto Fort Randall Dam. Of all the sights and attractions, one of the most interesting is the dam itself, which is named after the 1860s-era Fort Randall. A visitor’s center has exhibits and even summer tours (pending COVID policies). Just west of the dam lie the remains of the old yellow chalkstone Fort Randall chapel, and a mile further is the post cemetery with a sign that records how the soldiers died.

The Five Tribes of the River

The Missouri’s ancient river culture is rich with beauty, wisdom and nature. Five Sioux tribes of the Lakota and Dakota have reservations that border the Missouri in S.D., and they welcome travelers. Four have tribal casinos (near Mobridge, Crow Creek, Fort Thompson and Wagner). Chamberlain hosts an exceptional cultural center, the Akta Lakota Museum, and on the bluffs east of the city is artist Dale Lamphere’s acclaimed “Dignity of Earth & Sky” a 50-foot sculpture of a proud Indian woman. Oscar Howe’s 10 gymnasium-size murals are preserved on Mobridge’s Main Street. Each tribe and reservation has interesting attractions, historic places, gift shops, art, monuments and such.

Find a Way to Get on the Water

The Missouri River is fun to explore from its 3,000 miles of South Dakota shoreline, but there’s no substitute for getting on the water. Thank your lucky stars if you have a boat or — even better — a friend with a good boat. If not, there are rentals in most towns along the river. It needn’t be a power boat — canoes, kayaks, paddleboards and even simple tubes and floats suffice. Even the most inexperienced landlubber can enjoy the Missouri; just seek out the locals for advice.  Always wear a life jacket because there can be strange currents and whirlpools. Take special precautions on windy days and beware of cold-water temperatures in the spring and fall if you are on a tube or smaller vessel.

Some newcomers to the Missouri River valley wonder why everyone is walleye crazy. They are the folks who haven’t yet cast for South Dakota’s state fish. The walleye is a challenge for anglers — yet it’s a fish that anybody can catch, with a little luck and timing. It also ranks among the tastiest fish in the USA, especially when beer battered. Bass are also popular in the four reservoirs, along with perch, trout and many other species. There’s also a limited season for the paddlefish, a pre-historic creature that can grow to the size of a man. Some also like to drop stinky bait in river holes for giant catfish. The variety of experiences are many. Fun-loving guides are available in every river town, and they have boats and tack. But this is a river where anyone with a little luck and patience will get a bite, and there’s plenty of advice to be had at the bait shops and bars. The Missouri River is so big that most anglers don’t worry so much about keeping secrets on where to find the fish.

The famed explorers went upriver in 1804 and returned through this country in 1806. Today, Highways 1804 (east side) and 1806 (west side) commemorate their explorations with an auto tour that has stretches of river views, Old West history and scenic landscapes. One of the most interesting segments is an hour-long drive on Highway 1806 from Lower Brule northward to Fort Pierre. The drive from Mobridge to Pollock on Highway 1804 also abounds with natural beauty. However, there are scenic and interesting backroads and historical treasures everywhere along the river so explore for yourself. Be sure to take an atlas or detailed map because GPS and Google sometimes get confused in this big landscape. Enjoy the small-town eateries. Some still serve German foods handed down through the generations, like schnitzel and sauerbraten.

Lewis and Clark Lake, created by Gavins Point Dam west or Yankton, is the smallest of the four reservoirs in South Dakota. Bordered in places by chalkstone bluffs, it is a water haven for sailing enthusiasts and one of the busiest camping spots in all the Midwest. By most standards, nearly all the Missouri River valley ranks as wilderness but two stretches in the southeast are unique to the 2,341-mile river, which was dramatically changed by dams and channelization in the mid 20th century. A 39-mile flow below Fort Randall Dam and a 59-mile segment below Gavins Point Dam are part of the USA’s national Wild & Scenic River system. The Missouri National Recreational River has a visitor’s center in Yankton, and a website with good information for visitors interested in fishing, boating, canoeing, kayaking, hunting, camping and bird watching along the Missouri.

Islands are Treasures of the River

Missouri River islands are not the palm tree variety, but some have “sand in your toes” beaches and all have more peace and solitude than you’re likely to find in coconut country. Many of the river’s islands can only be reached by boat, but there are two at Pierre that even have parking lots., At LaFramboise Island (a short walk from downtown) and Farm Island (east of town along Highway 34) are quiet cottonwood forests with good hiking and biking paths. Lewis and Clark must have had a good day at LaFramboise because the explorers nicknamed it “Good Humored Island.” May you feel the same.

Catfishing is a popular sport for Yankton residents because the wild Missouri River flows just south of town. There are tricks to landing the wily cats, and to cooking them. But it’s nothing you can’t learn. Ask Nata Jones.

Nata is a native of Chernivtsi, a city of some 240,000 people in the Ukraine. She met Brad Jones of Yankton while vacationing in Minneapolis, and within a year she left her chocolate store and was married at the Chapel in the Hills near Rapid City. “It was a beautiful wedding at a wooden church in the mountains,” she recalls warmly.

You can access this peninsular Xanadu at the Little Bend Recreation Area. At a point where the road curves southwest down to a boat/fishing pier, there’s a small parking area with a sign that indicates walk-in only. From here you’ll leave the state recreation area, though the entire peninsula is a public land, state and federal (Army Corps of Engineers). My guess is that very few non-hunters ever hike here.

Angels Along the River

Each spring, South Dakotans who live along the Missouri River become friends to adventure hunters attempting to paddle the entire river, starting in Montana at the source and continuing to St. Louis (or sometimes all the way to the Gulf of Mexico).

The trip has allure because the Missouri is the longest river in North America at 2,341 miles. After all, would you train to scale a mountain and then fly to Alaska to climb something other than Denali?

Turning to the River

American rivers were once treated as the backyards of our cities, convenient places for unsightly factories, meatpacking plants, city dumps, salvage yards and such. South Dakota was no exception, even along the fabled Missouri River. Sioux Falls architect Tom Hurlbert saw that paradox when he traveled to Fort Pierre to assist with plans for a new riverside restaurant called Drifters Bar & Grille.